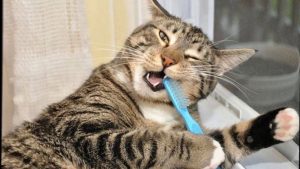 One of the main concerns of any cat owner is to care for the teeth of his pet. This is extremely important, because cats can also have serious problems with their teeth, and if you do not give the cat proper attention, the consequences can be sad.
What you need to know?
Kittens are born without a tooth, and only when they are about 2 weeks old do the first incisors erupt. Baby teeth in cats appear only at 8-12 weeks, and only after that the animal can begin to eat fully. The total number of milk teeth – 26 pieces, and among them:
milk fangs (cut through 3-4 weeks),
premolars (cut through at 3-8 week).
Constant teeth in a cat are 30.
At the same time, many pet owners are interested in the question of when the cats change their teeth, because usually this process happens rather quickly. As a rule, the first permanent teeth begin to erupt at 3 months, and by the 7th month the change of teeth in cats ends. In this case, permanent canines appear for 4-5 months of life, and permanent premolars and molars – at 4-6.
Cats’ milk teeth: do they need to be removed?
In fact, milk teeth in animals fall out independently, and this happens by the end of the first 6 months of their life. However, if this does not happen, the teeth will need to be removed in a veterinary clinic, because at this time permanent teeth begin to erupt, and an excessive amount of teeth in the oral cavity causes soft tissue injuries, contributes to the development of periodontal disease and leads to a change in the bite of the cat.
Also, no matter how many teeth a cat has at a given moment, one should also pay attention to their condition: cats can have tartar (usually on molars and canines), which causes serious problems. Such a stone looks like a yellow rim on the teeth, located at the very gums, and if the cat’s teeth care is not at the proper level, the stone may even become more than the tooth itself over time!
The main reason for its occurrence is bacteria, as well as the remains of salts and food that are in the oral cavity. As a result, plaque appears on the teeth, which hardens over time. In this case, this happens only in domestic cats, since in nature animals use their teeth much more actively and get rid of the stone themselves. If you want to achieve the same effect and do not want to brush your cat’s teeth, feed her with large pieces of meat or dry food. Then there will be no problems with tartar, but there may be other problems with digestion! And in order to protect your pet from any complications, it is better to immediately prevent the occurrence of problems with the help of tooth brushing.
How to brush your teeth a cat?
Starting this process, you should firmly grasp: it is necessary to brush your darling’s teeth, and there is not a single argument that allows this to be neglected!
First of all, cleaning allows you to remove tartar, because of which the cat can inflame the gums and loosen the teeth themselves. Then the loose teeth begin to ache, and the cat cannot fully eat, chewing only one side of the mouth and suffering from increased salivation. Moreover, if the growth of the stone is not regulated, it will eventually increase and harden, after which it can only be removed mechanically (in a veterinary clinic and under general anesthesia!). Given this, it is better to spend some time cleaning than to treat the complications!
In addition, brushing teeth in cats helps to get rid of bad breath and food debris, which sooner or later can cause a general infection or even the formation of an abscess.
How to brush a cat’s teeth? Everything is very simple! You can use:
soda and ordinary red wine: first, you must wipe the molars and fangs with a cotton swab dipped in wine, and then apply a slurry of soda – vinegar in the wine will react with the soda and quickly remove the plaque accumulated on the teeth;
a children’s toothbrush with soft bristles and tooth powder – with their help, you should carefully remove the plaque, acting very delicately and trying not to damage the gums;
special brush and toothpaste (for cats developed a special paste with the taste of fish, but the human means it does not fit!).
The main secrets of brushing teeth
The procedure of cleaning teeth from a stone cannot be carried out too often, but in order to clarify its regularity, it is better to contact a veterinarian. He should assess the condition of your pet’s oral cavity and individually determine the frequency of tooth brushing for her. Usually, pet owners begin to worry about this after the teeth have changed in cats, and before that only preventive measures can be carried out by adjusting your pet’s menu.
And, of course, it is better to think over your actions in advance if the cat does not want to care for his teeth! Animals often perceive such care as an attempt on their freedom, but even if your pet breaks out and bites, you should not throw this procedure! Remember: without brushing, cats lose teeth and gums hopelessly deteriorate, and if your pet is totally against a toothbrush, use special cleaning foods. 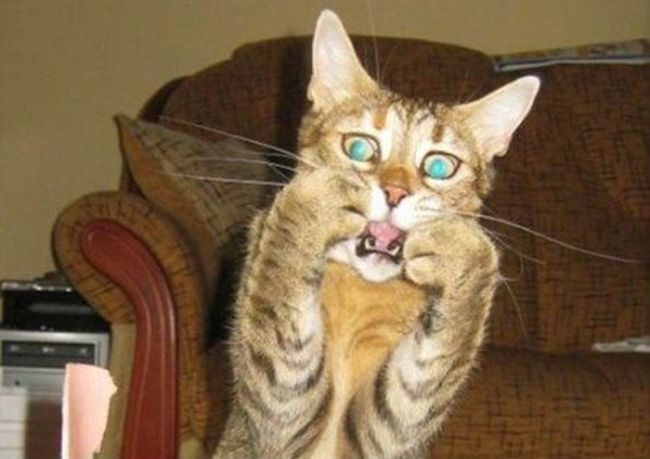