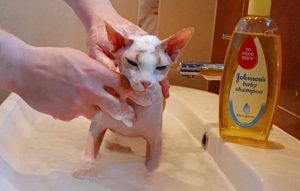 Owners of cats without hair always think that their pet has one major advantage over other members of the cat family – there’s almost no need to take care of it! But is it? Indeed, such a cat does not need combing, cutting or special processing of wool (because the animal simply does not have it!), But this does not mean that such a beast does not need care at all! The content of “naked cats” requires a special approach, and this is worth knowing even before getting such a pet.
What are some naked cats?
As a rule, such a species of feline is associated with a single breed. This is a sphinx cat, care of which requires special skills. Such an animal is distinguished not only by its smooth, hairless body, but also by the soft lines of the body, piercing eyes and the absolute harmony of its proportions.
Despite the fact that sphinxes are associated with Egypt, the breed, which we used to see, was derived in Canada, and that is why its name always has the prefix “Canadian”.
Egyptian sphinxes do not exist (except, of course, the famous monument of architecture!), This is just a myth, like most myths about animals, although, of course, hairless cats lived in ancient times. Certain species of such animals were found in the Aztecs and later they were called Mexican hairless cats – to America, and then to Europe, they were brought from Mexico.
All the main time they were naked, but in the winter on their body grew long hair, which kept up to warming. They were demonstrated at the first cat shows of the 20s of the twentieth century. in the United States, and the last pair of such animals lived to the 30s, but, unfortunately, did not leave offspring. It was then that she was replaced by Canadian hairless cats, which today are the kings of all exhibitions and the favorites of numerous breeders.
There were naked cats with the Canadian “registration” 40 years ago and almost immediately conquered the world. However, there are other varieties of sphinxes, among which are found:
Don Sphynx – bred in Russia and in another way may be called Russian hairless,
St. Petersburg sphinxes are also bred in Russia, but under the special conditions of the harsh St. Petersburg climate (they can also be called Peter-Bold).
These are also very popular sphinxes-cats, the species of which began to appear 15 years ago and are now at the stage of formation.
Care and maintenance of sphinxes: Beware! Soft skin!
Sphynx is a cat that is completely devoid of coat, but it is characterized by the presence of delicate skin, which is very pleasant to touch. Care for such skin requires a special approach and compliance with a number of rules:
For the treatment of cat skin, you can use regular baby shampoos,
Such a cat can, if desired, gladly splash in the bathroom and even dive, however, during the water procedures its large ears are best laid with a tip, so that no water gets into them,
If your naked cat does not like water, you can not bathe it, but gently wipe it with a cotton swab dipped in a special baby lotion designed for baby skin,
It is necessary to bathe the sphinx in water, the temperature of which is 36-38 degrees – a cooler bath will make the cat freeze, and a hotter bath can cause discomfort and even burns on delicate skin,
At the bottom of the bath, in which you will be bathing your pet, you need to put a rubber mat so that the cats’ feet do not slip during bathing (it is very important for the animal when there is something to hold onto with its claws)
You should not water the bathing cat out of the shower with water – it does not like it: it is better to gently wash the shampoo from your sphinx with your palms,
When swimming with sphinxes need to be treated gently, but confidently and decisively,
To prevent the cat’s skin after water procedures from being dry, it should be lubricated with a light oil or baby cream.
It should be borne in mind that the sphinx is a unique breed that is able to sunbathe and sweat in hot weather! It is easy to check this: it is enough to touch a pet in summer, and his skin under his fingers will be wet. It is necessary to remove traces of sweat, otherwise the animal will simply be uncomfortable, and its skin will look untidy. This can be done with the help of the same cotton swab dipped in lotion.
In addition, it should be noted that the skin of sphinxes emits a special substance that has a brownish color and is designed to protect the animal from various environmental influences. It looks like a wax coating, and if you do not wash it off from the skin, the animal will look “dirty”, and the pores of the skin will begin to clog. This can not be allowed, and that is why in the heat of care for sphinxes should be more frequent – without swimming at least once a week is not enough!
How to care for different parts of the body of sphinxes?
Particular attention should be paid primarily to the ears: they are very large in sphinxes, and therefore dirt is easily and quickly accumulated in them. To remove it, you need to clean your ears about twice a week with ear sticks. Cotton wool in this case is not necessary to lubricate.